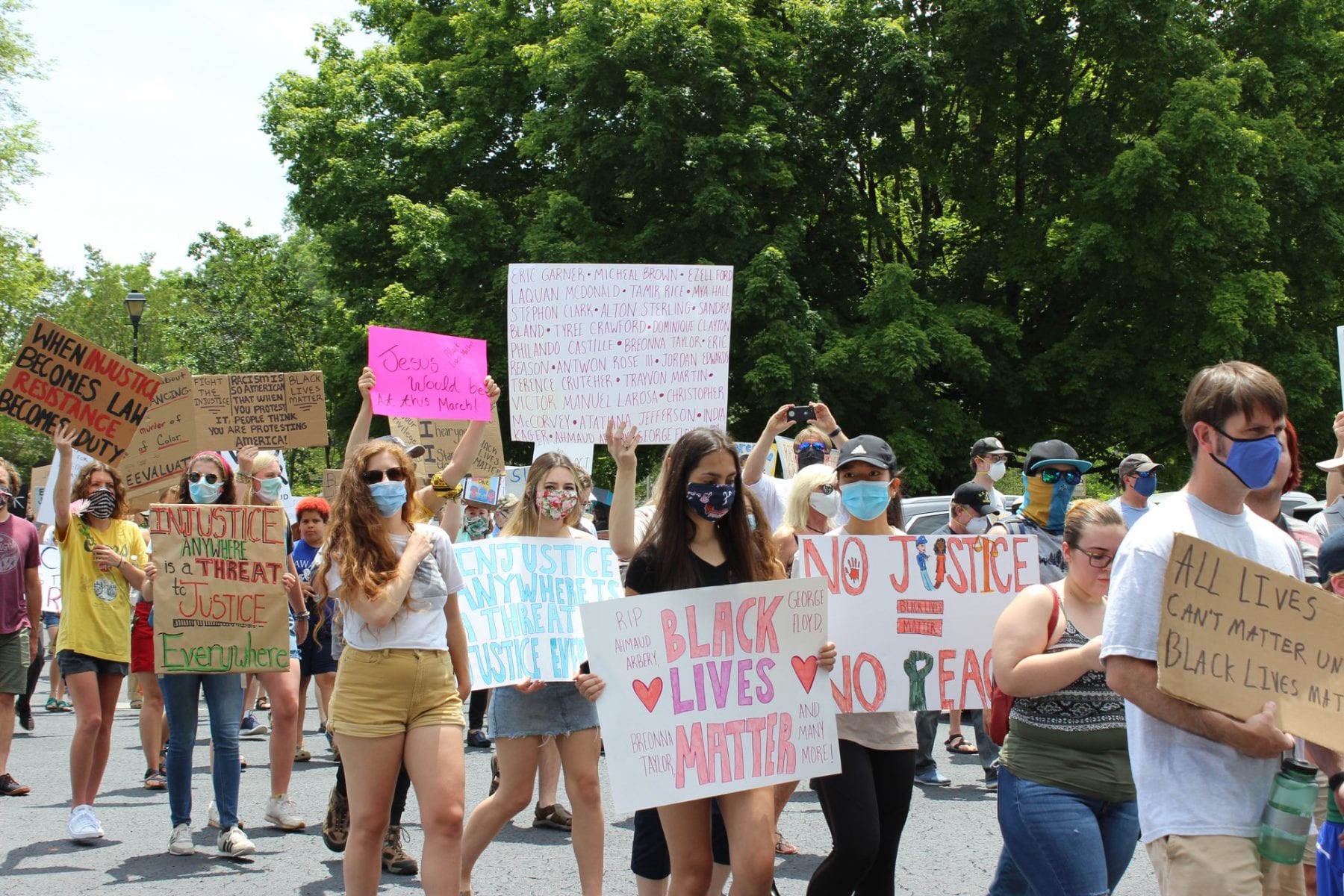 CLAYTON, Ga – On a Saturday afternoon in June, around 200 people took part in Black Lives Matter march from the Rabun’s Veteran Memorial Park to Main Street.

The peace march and vigil, as the organizers called it, demonstrated how people in North Georgia were ready to see a change. Marchers walked mostly in silence to Main Street, where they were told to continue in silence until marching back to Veteran’s Memorial Park.

The four women who planned the event all have ties to Rabun County. Three grew up there. Each of them strongly believed that the nation needs to address the disproportionate violence that occurs against black Americans. Before leaving, St. James Episcopal The Reverend Doris Graf Smith said the opening prayer. Everyone also repeated a peace mantra:

Those in attendance received free water and a handout with the names of 72 black Americans who died unnecessarily and next steps for people to take. The “what’s next?” list included calling US Representatives, having conversations, holding others accountable for speech and actions, educating themselves on white fragility and antiracism, finding protests in the area, signing petitions for Black Lives Matter, and donating to protests bail funds.

Mandy Pileski, a psychologist and one of the organizers, stated:

“I think what you see all across the US and in the small towns now is that enough is enough at this point. You know I think that a lot of white people that we’re recognizing that there’s a lot that we haven’t been privy to for a long time. Now these things coming out on video and us seeing for ourselves what’s happening, we’re finally listening.”

She also brought up how Rabun can isolate the predominately white population from people of color. As a result, small-town America hasn’t confronted racial issues like people living in the cities or suburbs. 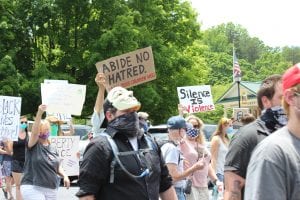 “Racism I think is imprinted on us in childhood, whether we grew up in racist families or not, just by the fact that we live in a mostly white area. All that we were exposed to as kids was pretty much the news. It didn’t always paint people of color in a positive way.

“Another police friend of mine discussed creating accountability across the whole state, maybe having a statewide database, where these ‘bad apples’ that cross the line, do things they should be doing, it’s in a database. So, they can’t just skip on to the next town or go work somewhere else and keep doing what they’re doing.”

Sheriff Nichols outlined some of the reforms he is addressing in his office during the march’s opening:

“Being mostly absent from social media the past week allowed me the opportunity to reflect in the presence of peace and with absence of turmoil as I sought to understand how the nationwide unrest can and does impact our small agency. It is difficult to realize that any of these societal injustices are applicable in our area, yet as the leader of the RCSO, I strive daily to identify ways that I can make a difference for my employees and my community. At this time, I have planned mandatory biased-based policing training, social media training, and am in the beginning stages of organizing race relations training. Later today, our agency will partner with the Clayton PD to ensure participant and community safety.” 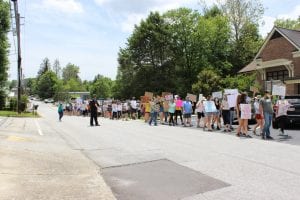 The march wound around to Main Street.

Other protesters stressed the importance of voting if people want to see real change. Republicans and Democrats have come and gone and still, police brutality continues to take place, particularly against those in the black community.

“Without getting political, I think a lot of it really has to do with our leadership right now. We’ve already heard someone say, ‘I can’t breathe,’ and everyone marched and now we’re doing it again. You know what I mean?” said a protester who remained nameless.

Another protester, Amy  Hayes, drove up from Habersham and brought her bi-racial son to the march. She believed it’s important that children see that they can make a difference and felt safe bringing him to this event.

“Racism still exists in this country, and people should not be treated differently because of the color of their skin or where they come from or their socioeconomic status. As a mother of a biracial child, I should not have to teach my child to behave differently in crowds, in public situations, around white people, with the police. It’s just time for a change. I’m tired of people having to live in fear. This nation’s better than that,” she declared.

Hayes also hoped that more white people would become aware of their privilege afforded to them because of their race. “We live in a bubble. We don’t know what people outside of our bubble are experiencing. I just hope that they learn. They educate themselves, and we shut up and we start listening to the people who’ve been struggling for so long,” she added before flipping her sign over to reveal the back. It read, “police reform now.”

An advocate for more training for law enforcement in de-escalation tactics, understanding people, and successfully restraining people, Hayes commended the steps Sheriff Nichols is taking with his officers.

At around 3:20 p.m., the marchers returned to Veteran’s Memorial Park and took part in the closing prayer.

FYN didn’t witness any detractors at the event. Everyone was supportive and law enforcement was present to ensure everyone was remained safe throughout the march.

See photos from the event here.