“A graduate of The Citadel, South Carolina’s well-known military college, Will Beattie is an avid outdoorsman and first-generation farmer. He founded Bear Creek Cattle Company with just a few head of cattle and a big dream to produce the finest beef while preserving the environment of his Cohutta mountain farmland for future generations.” Beattie’s introduction on SHOP HQ explains a history, but very little of the actual man who took a small area near Bear Creek on Gates Chapel Road in Gilmer County and slowly grew it into a nation-wide empire of steak. 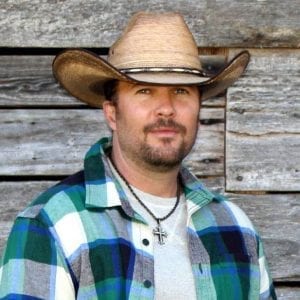 Will Beattie, owner and CEO of Bear Creek Cattle Company

Many people follow the trend of farm-to-table, but Beattie will tell you this is more than just a trend or popular fad. Putting the effort into taking as little time as possible between proper aging and a person getting the beef to cook is key, but being the person behind that product, being a company that people know, is just as key.

Behind the success and the growth, Beattie says it was an accident that he even started building the company. In fact, Bear Creek Cattle started as a hobby to justify some extra land. Over nine years ago, Beattie worked for ETC (Ellijay Telephone Company) in Gilmer County when the opportunity arose to purchase some land surrounding his. However, as he began considering the purchase, he had to come up with a reason for himself to purchase the extra land.

That was the first thought of cattle raising that Beattie had. He said, “I started it with the intent on raising calves for the commercial market, selling them at the stockyard just like most small farms across America. I had always had a passion for sustainable living and producing a natural healthier product.”

Beattie had a team of draft horses that he used to build and prepare the farm. A “lost art” as he calls it, he used these horses in all corners of his farming with that team. As he began his “hobby,” he had four cows. Raising new calves on the farm, he was also raising his daughter, Jadyn, who was born in 2010. Beattie began thinking about his family and his farm. His original intention of selling his cows to the commercial market never came to pass. Instead, plans changed and the beef was to be for the family and local businesses. 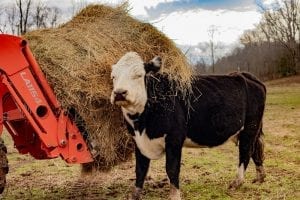 As the calves grew to maturity and after processing through a USDA plant, Beattie gave away some of the beef and sold more in quarters and halves. With friends and businesses asking for more and more, the first sparks of Bear Creek Cattle lit the tinder.

“It seemed more a fantasy job to be able to actually take it from pasture to plate,” he said.

As he nurtured the growth and continued his fledgling farm, another break came when the company fostered a relationship and a retail spot in Mercier’s Orchard. This launched Bear Creek Cattle forward into new territory with labeling and marketing through retail. Each new step gave light enough for the next one and relationships grew. One of those relationships fostered into the first restaurant serving Bear Creek Cattle Company beef. Mike’s Ellijay Restaurant became that first restaurant. Beattie said they started serving it more as a favor than anything. However, that favor soon turned to benefit as the popularity grew more. 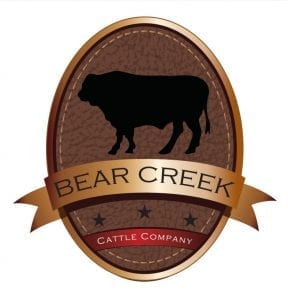 The continued snowball mounded more retail spots and restaurants until, in 2019, Bear Creek Cattle Company owned five farms and 200 head of cattle. They supply 30 restaurants and have signed a contract to partner with another herd. However, the icing on that cake came when Beattie got contacted by another group wanting to partner.

After a lengthy logistical process over recent years with the Evine Network, he had little hope of continuing to pursue the partnership. However, last year, after rebranding and becoming ShopHQ, Beattie was contacted from their end and offered another chance. Late October, in 2019, he got the call to see if he was interested. In less than a week, Beattie was in Minneapolis touring the facility. With the partnership signed, Beattie was back in December on his first live television airing on ShopHQ representing and selling for Bear Creek Cattle Company.

Completely selling out of stock on that day and immediately being asked to return for a second show, Beattie says he was ready for more. But he didn’t have to wait long before another call came asking him to guest star on another show in Miami. Now, that second appearance for Bear Creek Cattle is scheduled on Shop HQ for February 9 at 9 a.m. 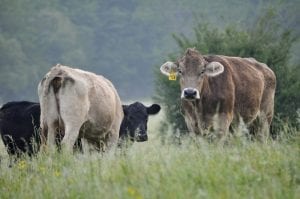 Reaching back to the accidental start of Bear Creek as it switched from hobby to business, from commercial selling to direct sales, Beattie says it was the chance to grow “organically” that made it fun and successful. But it was also the sacrifices from his wife, Tiffany, and daughter, Jadyn, for two years until they landed their first retail spot in Mercier’s, then on to Mike’s Ellijay Restaurant. It was his family and his effort that took him to larger successes like Fightingtown Tavern in Blue Ridge and, eventually, to Shop HQ and nationwide sales through that partnership.

Bypassing the idea of selling to commercial markets and going through the companies, becoming the direct supplier for so many places is only part of the success this small business has seen. Beattie added that he’s more excited that he didn’t go through an investor deal or things like shark tank deals. There was no specific catalyst jump-started or allowed a major step to bypass. Beattie said his flexibility and drive took him from his hobby to selling nationally when Shop HQ was never even a thought in the first years or a part of some 10-year-plan. 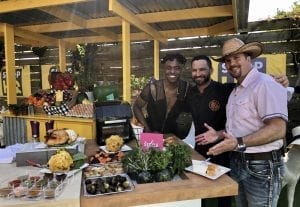 Bear Creek Cattle Company owner Will Beattie, right, poses with chefs on the set of ShopHQ.

Staying small and successful organically grew into a small-in-origins, but large-in-production company. “And local is all relative now,” says Beattie, “The biggest piece that is a sales-point for us is being the best product and being a transparent company. Although we’re not their physical next-door neighbor, we can still be their next-door neighbor because they can check us out on social media and see what’s going on behind the scenes and know how the product is produced… It’s a labor of love.”

The challenges of such expansion comes with staying true to his roots. Beattie says he will not pull beef off a shelf, but with rising demand, artisan beef has to be raised to maturity before harvest. That takes time and resources. Those resources are also a part of what makes Bear Creek different. Beattie said that Gilmer County is one of only a few places that he could accomplish what he wanted with his cattle.

He said, “One of the unique factors of beef produced in Gilmer County is we are one of only a few places in the entire nation where a watershed begins. And a watershed being where the water actually comes out of the mountain, out of the ground. It’s not accumulated in a stream, a creek, a river, or a lake, and then used as a water source. The creeks that run through our farm, they come straight out of the Chattahoochee National Forest… Why that is important is that cattle drink more than they eat. They can drink upwards of 50 gallons per head per day.” 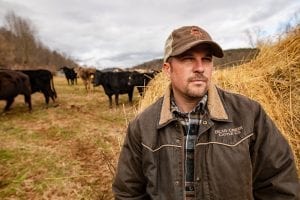 More than just the water, the community and the beauty of Gilmer County add to the farm. Supporting agriculture and agricultural products are another part of that community that Beattie says are a part of the allure of the company. While something like Bear Creek Cattle Company could be successful somewhere else, it would not be that same thing. It would not have the combination that the land, the community, and the people give to this specific location.

Following his passion and interest, Beattie said he was never a trendsetter in the food industry, but he knew he wanted to follow his carnivore instincts and share the best tasting steak he could. Having farmed for more than nine years, and having a passion for the more natural side of life before that. It seems obvious to say that Beattie was ahead of the farm-to-table fashion for food. Still with such close growth in both, it is difficult to say what came first, Bear Creek or the trend.