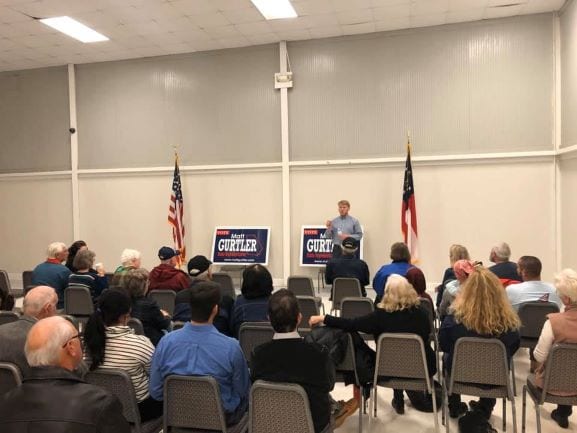 RABUN COUNTY, Ga – Georgia District 8 State Rep. Matt Gurtler appeared to be the only House Republican to vote against HR 882, and he asked the public to read the entire resolution before making any conclusions.

“I support [President] Trump and our Armed Forces,” Gurtler told FYN over the phone. “He’s really been trying to keep us out of [middle east] wars. I think he’s shown immense restraint in doing that. This resolution was really a constitutional issue for me.”

The non-binding resolution praised the president and the military for the successful “operation that neutralized Qasem Soleimani.” Gurtler cited HR 882 as unconstitutional due to the disregard for Article 1, Section 8, and references to past president’s foreign policy. He urged constituents to read the document for themselves and come to a conclusion.

“War is a serious thing, and we want to do it right…In the Constitution, war powers [are] delegated to the legislative branch that’s Article 1, Section 8….When you look at the constitution, I can’t pick and choose which parts I want to uphold and which ones I don’t,” said Gurtler.

“If we want to go to war with any country, lets openly debate it,” said Gurtler. “Under the war powers act, we have not been doing that. We’ve been giving all the power to the executive with many different administrations.”

“Even in the resolution, it mentions [President] George W. Bush and his foreign policy, and Trump has criticized the past two administrations overwhelmingly about getting in entangled alliances with these foreign counties,” the District 8 Rep. explained.

Here’s an excerpt from HR 882 that mentions Bush’s foreign policy:

“President George W. Bush designated Iran as a pivotal part of the “Axis of Evil” that “aggressively pursues these weapons and exports terror while an unelected few repress the Iranian people’s hope for freedom.”

Gurtler agreed that the world is better off without the Iranian General Soleimani. If the resolution only asked the public to support Trump and our troops, Gurtler said he would have voted for it.

He viewed HR 882 as a “political stunt.” The no vote isn’t a disagreement over the neutralization of Soleimani, rather the role of executive and legislative branches of government. According to Gurtler, the resolution was pushed through within 24-hours, and no one knew it was coming until it landed on their desks. “We had more pressing business to attend to if this came up later in the session, that’s fine,” he commented.

The resolution passed 93-86, just over the majority needed.

In response to claims that Gurtler’s a closet Democrat, he said:

“It’s disingenuous. You have to look at what the resolution actually says, and what it’s approving of. Republican Senators and Representatives in the U.S. House share my same concerns.”

Stan Gunter, who is Gurtler’s opposition in the 2020 race for the District 8 seat, has commented on the issue as well.

“That is a perfect example of why I got into this race,” Gunter said. “This isn’t the first time that a vote like this occurred. You can imagine what he does to his relationships with other Republicans because this bill went down the party line. The Democrats all voted against it, and he joined the Democrats.”

Gurtler released a statement on the controversial vote Friday, Jan. 17, which can be seen in it’s entirety below:

The same establishment that passed the largest tax increase in Georgia history just a few years ago, and passed another $150 million tax increase yesterday somehow has the audacity to call themselves conservative.

It’s one more reason why we must be skeptical of their messaging, they don’t care about being consistent.

If I didn’t take my job as your representative seriously I could vote based on the one sentence explanations and propaganda Ralston gives us, and repeat those lies to you. I think Georgians deserve better, and just like at the national level with Trump, I think the people are starting to see through the political theatre.

I’m writing this today because the latest attack is that I didn’t vote for a resolution. As usual the main idea is something that sounds good, and I wish they would have simply stated “We support President Trump and the brave men and women of our military.” But instead they added in a bunch of misrepresentations of our Constitution and even used George W Bush as a reference about our involvement in the middle east.

The fact that there’s any positive mention of Bush means Trump himself wouldn’t have voted for this resolution, and I’ll happily stand with him on that. The important part is the misrepresentations of the Constitution. As Trump has said over and over, we should have never gotten into these stupid wars, and ignoring our Constitution is what allowed that in the first place.

Below is my official response, and as always I hope this helps you understand where I’m coming from. Thank you for your encouragement, it makes what I’m doing possible.

From day one, President Trump has wisely pointed out that over the last couple decades, the many foreign wars that our country has been dragged into have been stupid mistakes. They have also been dreadfully costly—both in terms of treasure and more importantly, American lives. Time and time again, who has the President always singled out? The last two administrations! George W. Bush, the one who started the whole thing, and Barack Obama, the one who made it even worse—by arming the very enemies who have threatened our brave men and women of the military.

War is very serious and President Trump inherited perpetual foreign conflicts that he has tried to end. The Deep State though, along with the military-industrial complex that our President talks about, has made much of this important task nearly unachievable. These are the same people by the way that have continually lied to the American public—first about the Russia hoax, and when that didn’t work, they lied to the American people about the Ukraine. Ever since, they have tried to impeach and remove the President over much ado about nothing.

I do understand the President’s difficult position though—he needs to defend America while defending himself at the same time, and I support him in his executive position.

I, on the other hand, am part of the state legislature, which rarely has any input over matters of war and peace. When we do though, I’m going to take that responsibility seriously and as my oath requires, I will always put the Constitution first—precisely when doing so may help avoid these huge, foolish wars to begin with.

War comes at the cost of blood, sweat, tears and American lives and should always be declared by a vote in Congress according to our founders and the US Constitution in Article 1 Section 8. The legislative branch holds the sole power to declare war. Passing a resolution like this—one filled with half truths and absurd conclusions—is insulting and demeaning to the Constitution to which every member of our strong military swore an oath to protect and defend.

While I agree the Iranian terrorist deserved what happened to him, we obviously won’t always have presidents who make good decisions unilaterally. And this is why the responsibility ultimately lies with the Congress. If I can help encourage the Congress to do their Constitutional job, I’m alright with taking a few arrows along the way.

That being said, I’m quite sure many of my colleagues only had good intentions and simply wanted to support President Trump and more importantly, offer support for our troops. However, I don’t think a resolution that condones and supports the bankrupt foreign policy of Barrack Obama and George W. Bush—which our president unfortunately had to inherit—is the best way to go about doing so.

Lastly, I don’t believe that Trump himself would vote for this meaningless resolution, as he would never utter one single positive thing about Georgia W. Bush and Barack Obama’s foolish, expensive quagmires in the quicksand of the Middle East.

Thank you very much for your support…and God Bless America, our president, and the men and women of our military—I for one can’t wait to bring them home!